This isn’t a game. This is the place the game comes to learn. This is the place the present can’t catch. Where next gets known and the ball decides your fate. From the blacktop to the hardwood and throughout the Neighborhood, NBA 2K20 and its next level features are the closest thing to actually playing in the league.

This isn’t a game.

This is the place everything else follows.

Welcome to the Next.

NBA 2K20 has made it again. The title of 2K Games comes with enough new features for veterans to feel and evolution and the simplicity necessary to catch the newbies. Thus, the title par excellence of basketball stands, one more year, as one of the most complete sports games on the market.

Microtransactions and loot boxes are still there, but it is fair to say that they are not so invasive this time. Despite that, this is a sport simulator that has no rival in its genre: because of WNBA, gameplay improvements, audiovisual quality, cinematic style, depth of the modes… One more time, Visual Concepts keeps enlarging the dynasty.

It looks beautiful, plays like butter, and is still one of the most enjoyable games I play each year. The game does have its issues, but as of writing, a lot of the glitches I saw seem to have been addressed. My biggest gripe (and I know I’m not alone) is the amount of emphasis placed on VC each year, and how it feels even more off-putting this year. It takes away from what is such a beautiful and well-crafted game. But if you’re like me and don’t play the card game and don’t mind the grind, NBA 2K20 is still the best sports game on the market.

On the surface, NBA 2K20’s changes to its own formula might seem less substantial, but spend more than a few hours with its laser accurate recreation of modern b-ball and you’ll soon realise how refined it has become. Changes to Virtual Currency earning and progression take the edge off grinding, new additions to The Neighborhood and Pro-Am help bridge the gap between the two and a few welcome changes to MyTeam help facilitate move space for natural growth (even with the ever-present microtransactions). It’s not faultless, but those looking to play the full NBA experience on a handheld platform can do so with confidence and Visual Concept's approach to Switch is truly laudable. Simply put, there's no better basketball game out there.

NBA 2K20 is pure magic on the playground. The new physical model, the impact of the new defensive system and the fine tuning of the gameplay is something valuable which give to basketball lovers endless possibilities. On the other side, the new GM mode is very disappointing and 2K business model for MyTeam is still questionable. The good news is that microtransations are quite useless in MyCareer mode, which thanks to King James work shines again to its original beauty.

Overall, NBA 2K20 is still the best basketball game on the planet and that doesn’t look to be changing any time soon. While some fans may be upset about microtransactions, it’s not a requirement to play the game. At this point, however, it seems like as long as NBA 2K is the best game out there, microtransactions will be here to stay.

Facial animations are still odd, and monetization rears its head in practically every mode. But the core ball play, plethora of gameplay modes, and a great presentation all combine to make NBA 2K20 the basketball game to beat this year.

The quality of the port to Switch and the variety and depth of modes and options on offer in NBA 2K20 is incredible. That makes it such a shame that microtransactions infect the story-driven MyCareer, dragging that down to mediocrity or worse. Fortunately, the intriguing though repetitive MyGM mode and the flexible and engrossing MyLeague mode make up for the online-only options. Throw in the WNBA teams and NBA 2K20 is likely the best iteration of the series on Switch even with its caveats.

NBA 2K20 makes a few missteps in several modes and the gameplay is pretty much the same as before, but it’s still a reigning champion in its genre.

NBA 2K20 offers again what we saw last year and the year before that, which is a solid Basketball experience. Some minor technical issues are still here and there, which suggests that the developers are using the same core mechanics as they did previously. Maybe we need to wait for next generation of gaming devices for a completely new and fresh NBA experience.

The aesthetics and physics are the best I’ve ever experienced in a basketball game, the customisation and level of detail in created players and icons from the league is simply stunning, and the sheer volume of game modes to chose from is incredible. The huge downside to this game though is the greed from 2K who only want you for your money, making it purposefully hard to improve in MyTeam unless you bow to this.

NBA 2K20 doesn’t go over the edge, it doesn’t bring much novelty to the series. On the other hand, it has better defense and goes a little further as a simulation. But the micro-transactions are too strong with this one.

NBA 2K20 doesn’t go over the edge, it doesn’t bring much novelty to the series. On the other hand, it has better defense and goes a little further as a simulation. But the micro-transactions are too strong with this one.

Even if you just want to play a basketball game and you are frightened by the NBA 2K's hardcore character with its irreconcilable gameplay or if you are still averse to microtransactions, you have no alternative. Until next year's 2K21 of course.

For Switch-owning sports fans there’s nothing that comes close to NBA 2K20. Boasting great visuals, stellar gameplay and a feature-rich range of play types, there’s something for everyone, and while VC is still a ‘feature’ that we’d rather didn’t have a place in modern sports titles, it’s been balanced back in the favour of actual gameplay.

NBA 2K20 is a surprisingly fully featured offering on the Switch. The game controls beautifully and the Switch does a decent job on the graphical side of things. Some particularly egregious microtransactions do show up but thankfully, these can be ignored for the most part. 2K20 is hands down the best way to play basketball on the Switch right now and should be picked up by any fans of the sport.

NBA 2K20 keeps things fresh with some welcome tweaks to gameplay, refining a product that was already well-oiled and well-drilled. This year's MyCareer mode is an enjoyable enough experience but it, like most of the other modes, is spoiled by microtransactions. Year on year, Visual Concepts continues to push the bar on providing an excellent basketball sim. It would be nice if 2K could finally start providing fan service to match.

While it’s impossible to separate NBA 2K20 from its questionable monetisation techniques, there’s no disputing that it’s a fantastic basketball game. Best of all, there are next to no concessions made for the Nintendo Switch version - it feels great to play and runs excellently.

Overall, NBA 2K20 is still one of the best basketball games out there, but future iterations should either ease up greatly on the VC spend or drop the price significantly, so players won't have to spend extra money.

There are noticeable flaws in MyCareer's story and in other modes. Combine these with controversial and divisive microtransactions that have been mixed in, and you might have some qualms. However, NBA 2K20 still remains on a league of its own. With loads of content, amazing core gameplay mechanics, and unrivaled presentation, it keeps you engaged whether you're playing casually or competitively.

NBA 2K20 is a fun game that has tweaked a handful of different modes, provided a better story than usual and modified the gameplay in a challenging new way that takes some getting used to.

NBA 2K20 feels like a turning point for 2K, and not in the right way. The publisher got too greedy, and it's going to show, in the next year's earnings. It's actually detracting from a good game, turning into a casino experience. What makes it worse, is that there's literally a roulette wheel implemented, which only underlines what 2K had in mind. It's a shame, become the highlight of the NBA 2K20, like the addition of the WNBA, the improved ball control, and the multitude of other smaller changes are buried under a pile of microtransactions that make people wonder what they are actually playing. The only mode that seems to have escaped, somewhat, the microtransactions plague, is the story, which is almost good enough to keep the game upright by itself. But it's almost good enough.

I can only laugh about the casino games because they are so absurd and ridiculous. This kind of thing just does not belong in a serious sports simulation and always distracts me from the actual game, because I want to throw baskets in NBA and not spin lucky wheels. Without casino and VC, NBA 2K would be a much better game.

It’s a shame that the surrounding structures don’t hold up, because the in-game experience of NBA 2K20 remains top-class. Another year of refinements has smoothed out some rough edges of the basketball gameplay that was already worth seeking out. The level of control you have over shot types is both useful and entertaining. Defensive assignments feel like they work more consistently. The commentary repeats itself less. They’re great moves forward. But if you engage with the modes 2K seems to want to push most, you’ll have to deal with baggage that weighs down the experience.

NBA 2K20 is impressive off the court – the soap opera elements of the story mode notwithstanding – but the on-the-court experience takes the fun out of basketball. Wait for a price drop.

NBA 2K20 is yet another theoretically great basketball sim that undermines its improvements and core gameplay strengths with a realism-at-all-costs mentality and a near-dystopian approach to microtransactions. 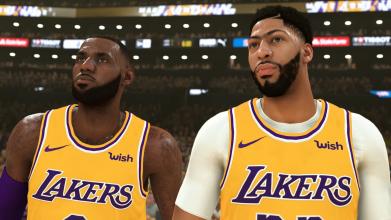 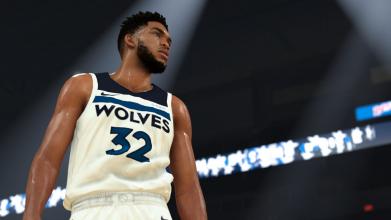 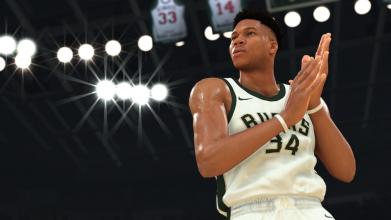 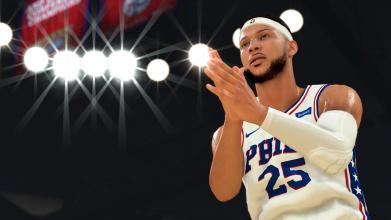 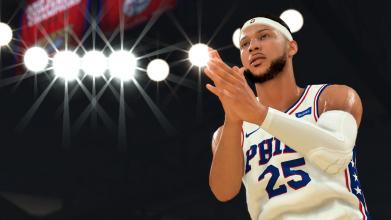 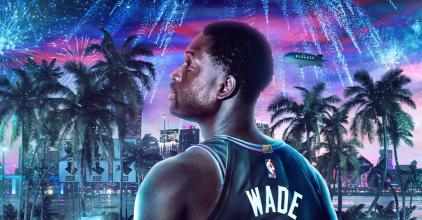 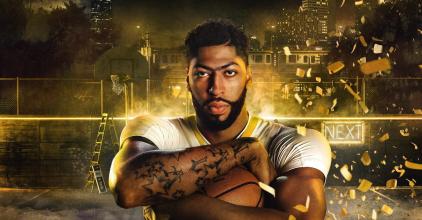 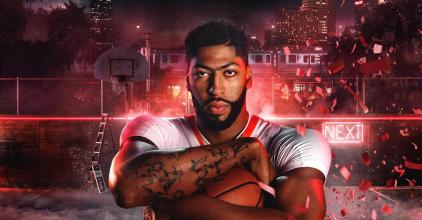