We are always getting emails from our users asking how they can get cheaper games and what our favorite cd key store is (it’s Amazon Digital Game Store, by the way). We’ve thought about doing up a nice guide for a while now and it was really just a matter of us getting off our bums to do one! So here it is…our guide to buying cheaper games.

Over the years we have learnt many tips and tricks on how we can drive our gaming dollar even further. The rise of digital gaming is great for gamer’s (you get your games quicker) however the reality is is that it’s not always resulting in cheaper games when compared to their boxed cousins.

We would love for you to contact us if you have any tips to add to the guide. Help out your fellow gamer’s!

Disclaimer – Whilst we believe all of the methods and websites we post below are safe, there is still an inherent risk when buying games designed for other regions (more on that later). We advise you to do your research before you buy to make sure you are 100% comfortable. Everything we do online has risks. Not every deal is a deal. Not all sources are legitimate. No risk, no fun though…right?

Like your good old boxed games, digital games are sold in different regions and currencies. This means that even when you convert the currency, one region ends up being much more expensive then the other. This is know as Price Discrimination. What is this exactly? Well, a game in the United States might be USD$60, but in the UK the same game might be £55. In Spain it might be €15. Basically, publishers and retail/online stores set the game prices individually for each region for the sole purpose of making the most profit.

The average wage in the United States is higher than in Spain, so gamer’s are more willing to pay more. They are perfectly entitled to do this. Doesn’t mean we can’t try and get around it!

How will I know if I’m being ripped off?

You won’t…until you look it up! 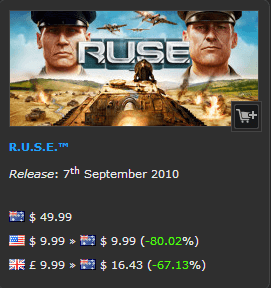 Now that we have defined Price Discrimination, let’s see it in action. When it comes to seeing the difference in Steam game prices, there are a number of ways. First of all visit SteamPrices and have a quick look around. On the right hand side, you can see Change Region and Compare With. Change the region to where you are currently living and compare it with the US and EU. The Australians reading might want to look away at this point!

The other cool thing we can do is check the game prices from different regions on the Steam platform itself.

We simply add the code tag to the end of the link, as below.

[divider]
There are tonnes more. Just use ?cc=xx and use any country you can think of. Does it make you throw up in your mouth a little bit?!

Can We Get Around Regional Pricing?

Of course we can! There are a few ways. Some require a bit of effort, some require to keep an eye out for sales, and some just require you to look in the right places at the right time. At any rate, we hope you find the below solutions useful.

As digital gaming has continued to grow and grow over the past 5 years, there was a few entrepreneurial people in Poland (among other places) who had an idea. These people said “If I can buy Battlefield 3 here in Poland for $15, why can’t I just sell the license code to someone in Australia?” What made this work is at the time Battlefield 3 was about US$80 in Australia.

I mean let’s face it, when you buy a physical game from the store, all you are really buying is the license code. Considering you can now download the game directly from the publisher through Steam and Origin, there is no need for you to even have the DVD in your possession.

So places like Online Key Store and CJS CD Keys popped up. These places sourced boxed games from places like Thailand, Poland, Russia where they are cheap and literally took a photo of the license code on the back of the case and started selling them to people in countries where the games are more expensive. 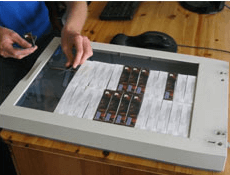 The customers comes along to one of these websites and buys the code. It delivered to their email box a short time, where the customer then inputs it into Steam or Origin. The game is then downloaded instead of installing it from the DVD He now has the latest game, significantly cheaper than buying it from his regions Steam store which has the higher prices (price discrimination).

Then…we came along. There was so many stores that started selling cd keys online that we thought it would be a good idea to compare them, to help gamer’s find the absolute cheapest price.

CDKeyPrices.com was the first price comparison engine for online cd key sellers. At the time of writing we track over 40 stores (there are many, many more on the internet), concentrating on the most reputable and popular. We are a simple service. Simply enter the game you are looking to buy and we produce a list of stores that have that game, and its price.

Steam, Origin and UPlay are not the only places where you can purchase your games. Sites such as Amazon, Green Man Gaming, Gamers Gate and others, now have their own digital gaming stores. What this means is that you can buy Steam, Origin and UPlay cd keys from places other than the official platforms. This is great for us. They are authorized and official (no risk to us), but secondly, these stores can set their own prices, which a lot of the time are cheaper than what you can get them for on Steam and Origin.

So we turn to our favourite authorized seller…Amazon.

Although only residents of the US are able to make purchases from the store without issues, it’s very very easy for people outside the US to do so as well. All you need to do is change your billing address. We have a very informative and popular guide on how to do that here.

At the time of writing, the Amazon Digital Games Store has over 2,900 titles. It’s massive. There basically is not a game that you can buy on Steam that you cannot find on here.So stop over paying for your titles on Steam!. They carry Steam, Origin, UPlay cd keys and more and more titles are added everyday.

The only other real issue we see with the authorized re-seller is the new games tend to be very expensive when they are released. Looking at a Titanfall CD Key we can see the price on Amazon is $59.00USD. The cd key stores (solution 1) are a little cheaper at $46, but these can be expected to drop closer to release and competition between the stores starts to take effect.

The prices for Titanfall are the same among the other authorized sellers. Decisions decisions!

The prices are in USD, so do a little conversion to see the true price.

Authorized re sellers are always having massive deals on their games. Whilst it is rare that is happens for a new game, it can still occur nonetheless. You got to be quick though, as sometimes the deals only last 24 hours or so. Whilst you can follow several websites (including CDKeyPrices) to be notified of great deals, it’s pretty good to also follow the sites themselves, which usually advertise the deals on their front pages.

Here is a few forums and deal sites you can follow to get the latest news on Digital Game Deals.

Care to share some of your favorites? Please let us know!

Another cool way to be notified of great deals is to join our newsletter. We don’t email for every deal, just great ones, such as when Battlefield 4 was on $24.99. You can join our newsletter on the top right of this page. No spam…we promise. 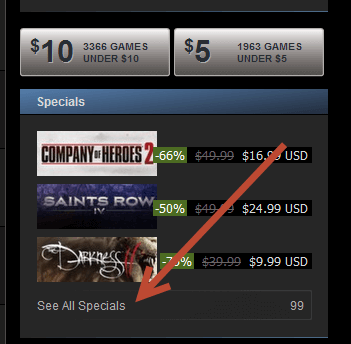 Lastly, keep an eye out on the websites/platforms themselves. In Steam, you can access the current deals from the store, about halfway down on the right hand side.

On Amazon, you can bookmark the Digital Game Deals page.

Green Man Gaming has a Hot Deals section which is frequently updated with awesome flash deals.

Gamers Gate, also has a dedicated section for deals which you can access here.

Solution 4 – Wait For The Massive Sales

There are a few notable sales periods that might only happen once a year. When they do happen though, the savings are massive.

Essentially it is a 24 hour period of big reductions. It’s not limited to digital games, though, however of course that’s all we are really interested in.

What makes the Cyber Monday sales really cool, is it involves all our favorite stores. Amazon went absolutely ballistic on Cyber Monday 2013. Recently released games like Battlefield 4, we heavily reduced and at one point were down to $24.99. Even then it was only for a few hours, so you had to be pretty quick. It eventually moved up to $29.99 after a few hours, before Cyber Monday finished and it went back up to over $50 (ewww)

The Steam Summer Sale is probably the most sought after for that platform. The dates vary, but the last few previous sales have been;

…notice the pattern….July! So be prepared.

A few important things to note about the Steam Sales. There are Daily Deals and Flash Deals. Daily deals are pretty self explanatory. They change every 24-48 hours and the savings can be pretty good. If you miss out you may have another chance in the Flash Deals, which change every 8 hours.

Community Deals are voted on the by the community, so keep an eye out here in case there is an older game you want to vote on, it might just get enough votes!

Kotaku.com.au has a really awesome and in depth guide on exactly how the sales period works, so you can really start to plan the even for 2014.

Besides the fact we track prices for cd key stores, we believe they are the best way to get gaming cheaper. Let’s face it, the less you spend on your games, the more games you can get!

Armed with the Amazon Digital Games Stores, we have never come across a time where we have paid over $50 a game. Amazon (which has great prices all the time), the crazy Steam Summer Sales, as well as the very good prices on the latest games from the cd key stores, gives us a great arsenal of websites to get cheaper gear.

Remember, keep an eye out for good deals. When one store has a deal on a popular game, the other seller usually does the same also.

Hope you found this useful!