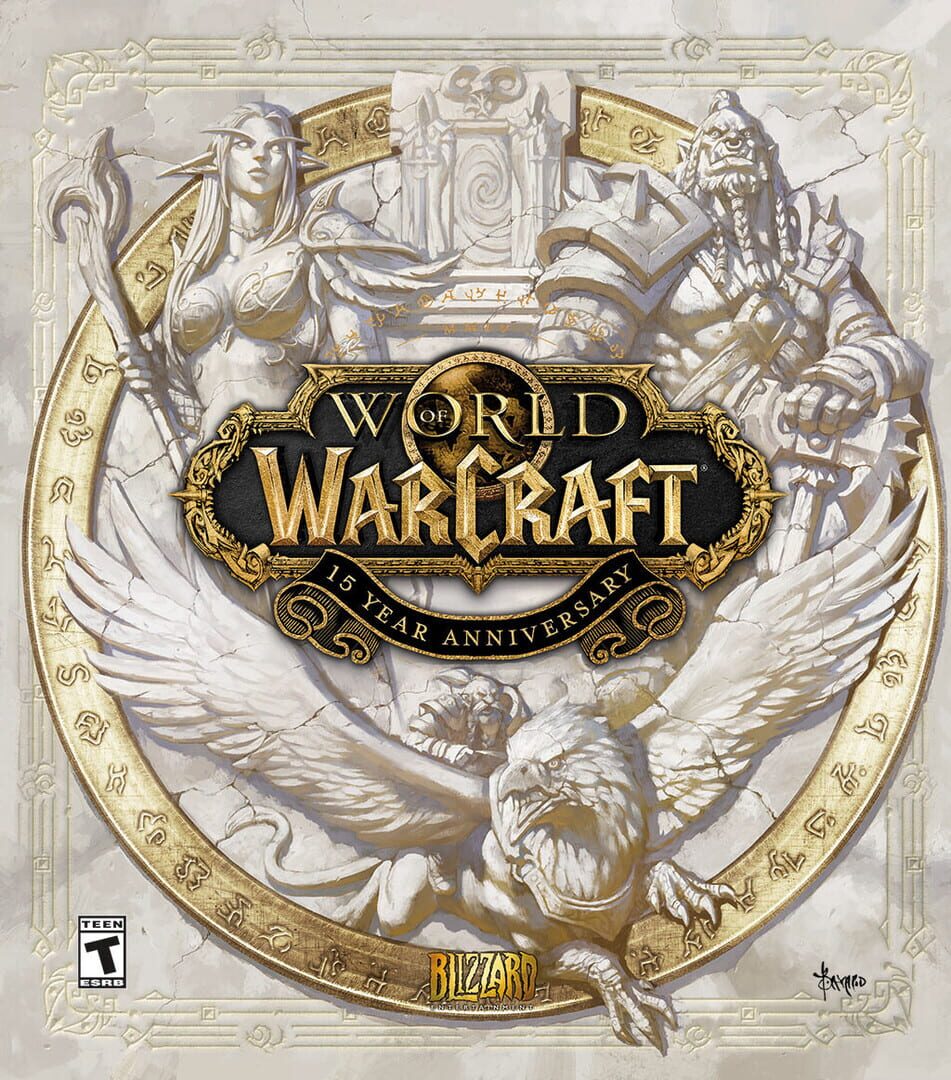 Celebrate your part in the online community that changed the course of gaming history. This limited-edition collector's set contains a trove of collectible items to commemorate World of Warcraft's 15 th Anniversary.

Ragnaros Statue
Behold Ragnaros, he who was ancient when this world was young! Bow, mortals, before this 10+ inch immortalization of the Firelord himself.

Onyxia Pin
Add to your pin collection and adorn your home with the head of Onyxia, Broodmother of the Black Dragonflight.

Map of Azeroth Mouse Pad
Gaze upon the realms your character has explored these past 15 years while you prepare for the next adventure.

Fine Art Prints
Reach into Azeroth's vivid past with this selection of frameable fine art prints.

30 Days of Game Time
Return to Azeroth with 30 days of game time to aid you on your next adventure.

Alabaster Mounts
Take to the skies with these sculpted beasts:
Alabaster Stormtalon (For Alliance characters)
Alabaster Thunderwing (For Horde characters)

*These mounts are not available in World of Warcraft Classic.

Intent on settling in Durotar, Thrall's Horde expanded its ranks by inviting the undead Forsaken to join orcs, tauren, and trolls. Meanwhile, dwarves, gnomes, and the ancient night elves pledged their loyalties to the Alliance, guided by the human kingdom of Stormwind. After Stormwind's king, Varian Wrynn, mysteriously disappeared, Highlord Bolvar Fordragon served as Regent but his service was affected by the mind control of the black dragon Onyxia, who ruled in disguise as a human noblewoman. As heroes investigated Onyxia's manipulations, the ancient elemental lord Ragnaros resurfaced to endanger both the Horde and Alliance. The heroes of the Horde and Alliance defeated Onyxia and sent Ragnaros back to the Elemental Plane.

Assault on Blackwing Lair
Deep within Blackrock Mountain, the black dragon Nefarian conducted twisted experiments with the blood of other dragonflights. Intent on seizing the entire area for his own, he recruited the remaining Dark Horde, a rogue army that embraced the demonic bloodlust of the old Horde. These corrupt orcs, trolls, and other races battled against Ragnaros and the Dark Iron dwarves for control of the mountain. Nefarian created the twisted chromatic dragons and a legion of other aberrations in his bid to form an army powerful enough to control Azeroth and continue the legacy of his infamous father, Deathwing the Destroyer. Nefarian was vanquished by the heroes from the Horde and the Alliance.

Rise of the Blood God
Years ago, in the ruined temple of Atal'Hakkar, loyal priests of the Blood God Hakkar the Soulflayer attempted to summon the wrathful deity's avatar into the world. But his followers, the Atal'ai priesthood, discovered that the Soulflayer could only be summoned within the Gurubashi tribe's ancient capital, Zul'Gurub. Newly reborn in this jungle fortress, Hakkar took control of the Gurubashi tribe and mortal champions of the trolls' mighty animal gods. The Soulflayer's dark influence was halted when the Zandalari tribe recruited heroes and invaded Zul'Gurub.

The Gates of Ahn'Qiraj
The great desert fortress of Ahn'Qiraj, long sealed behind the Scarab Wall, was home to the insectoid qiraji, a savage race that had once mounted an assault to devastate the continent of Kalimdor. But something far more sinister lurked behind Ahn'Qiraj's walls: the Old God C'Thun, an ancient entity whose pervasive evil had suffused Azeroth since time immemorial. As C'Thun incited the qiraji to frenzy, both the Alliance and Horde prepared for a massive war effort. A mixed force of Alliance and Horde soldiers, dubbed the Might of Kalimdor, opened the gates of Ahn'Qiraj under the command of the orc Varok Saurfang. The heroes laid siege to the ruins and temples of Ahn'Qiraj and vanquished C'Thun.

Shadow of the Necropolis
In the Lich King's haste to spread the plague of undeath over Azeroth, he gifted one of his greatest servants, the lich Kel'Thuzad, with the flying citadel of Naxxramas, as a base of operations for the Scourge. Consistent attacks from the Scarlet Crusade and Argent Dawn factions weakened the defenses of the floating fortress, enabling an incursion from the heroes that led to Kel'Thuzad's defeat. However, a traitor among the ranks of the knightly order of the Argent Dawn ran away with Kel'Thuzad's cursed remains and fled to Northrend, where the fallen lich could be reanimated.