Wolfenstein: The New Order is an action-adventure shooter game played from a first-person perspective. It is the semi-sequel to 2009's Wolfenstein, however utilizes very little from the game and drops any direct references to veil or supernatural.

To progress through the story, the player battle enemies throughout levels. The game utilizes a health system in which players' health is divided into separate sections that regenerate; if an entire section is lost, the player must use a health pack to replenish the missing health. In combat, a cover system can be used as assistance against enemies. The player have the ability to lean around, over, and under cover, which can be used as a tactical advantage during shootouts and stealth levels. The game gives the player a wide variety of weapon options—they can be found on the ground, retrieved from dead enemies, or removed from their stationary position and carried around.

Three years after the destruction of the Black Sun portal, the Nazis have deployed advanced technologies enabling them to turn the tide against the Allies. B.J. Blazkowicz is chasing down his arch-enemy General Wilhelm "Deathshead" Strasse, knowing that if he can kill Deathshead, the Nazi war machine will be crippled. His plans backfire however and Blazkowicz is mortally wounded and put into a partial coma. After being rescued by a Polish fishing vessel and taken to an asylum in Poland where 14 years pass, he is emerging into this world of darkness, dominated by the Nazis. Blazkowicz arms up once again and sets out to reignite the flames of rebellion and toppling the Nazi regime. 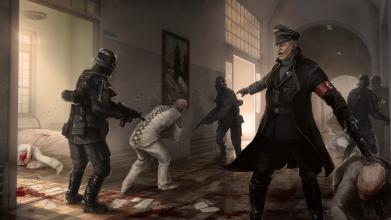 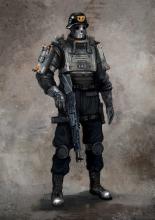