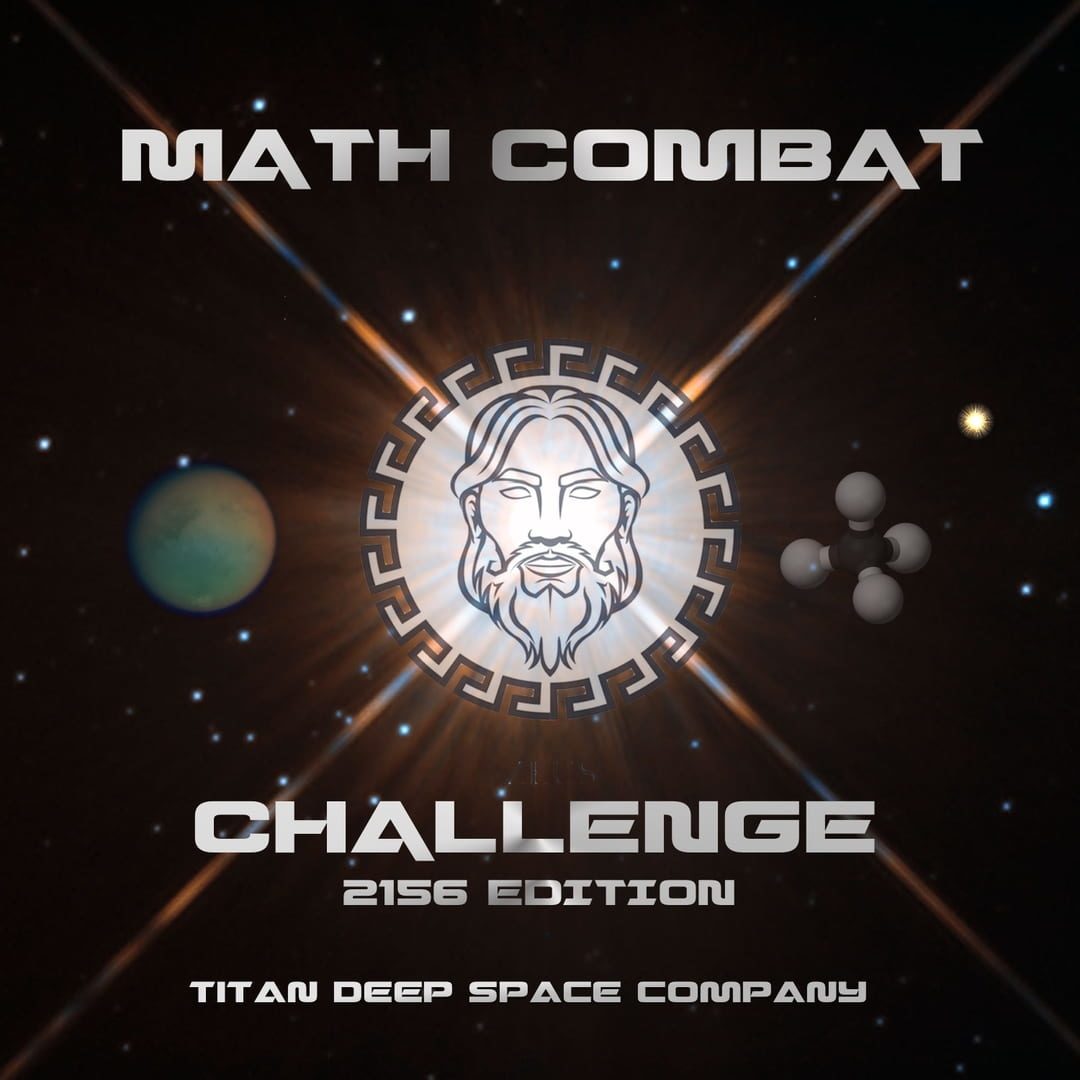 MC2 is a game of the type “survival”, in which it is necessary to surpass a series of mathematical tests in three scenarios. These tests must be passed while the player defends against various attacks of all kinds.

It is a first person shooter (FPS) and a tactical space simulator. But its main purpose is to be an educational game that seeks to solve math problems. It is not a simple game in terms of difficulty nor is it intended, but the easy level will be accessible to everyone.

Sandra had been out of the room where she worked for three weeks straight, on the east coast of New Zealand. She was focused on his research into a new genomic model for species adapted to environments that could be susceptible to exist on Earth, within the period of five hundred to a billion years. Her genetic research on adaptability of life to the environment, and her conclusions, were definitely unreliable. She would have to look for better alternatives. The most promising thing she had was focusing on birds, no doubt. Adapting some of them combining their DNA with that of other species promised to give more hopeful results.

She was absorbed in these thoughts when a signal sounded. It was an incoming call. She accepted it. The number was known. And unexpected. But somehow she felt the need to know what that was about.

“Well, if it’s Jan, my personal admirer.”
“Hi Sandra how are you. I have not heard from you in a while.”
“I’m dressed this time, for your misfortune.”
“That fixes easily. There are Irenka and the children. You could undress again. I liked the show.”
“Not in your best dreams.” He laughed. She added:
“How is Irenka?” And the children?”
“Irenka is getting prettier every day. And the children ask me about you.” Sandra sighed.
“I cannot go all I want, Jan. You can come home, taking the necessary precautions. Bring the children. But I cannot go, I can´t do that. You know, if they find me, if they know I’m an android …
“I know. But it is not fair. Together we have worked very well these years.”
“That explains it to the G.S.A. They continue with their android control campaign. You already know his motto: “Men will never be slaves. Androids will never stop being “.
“Something happened to you three years ago. Something you do not want to tell me. “Sandra nodded slightly.
“That’s right, Jan. I do not want to tell you.” Jan insisted,
“What happened to you up there, Sandra?” You’ve been very changed ever since. You got me worried. Irenka feels the same.”
“I could tell you. But then I would have to kill you.”
“You are very funny.” Jan never knew that, actually, it was not a joke. Sandra continued:
“Well, I imagine it’s not a courtesy call.” It’s another of your “jobs”. Jan nodded.
“It is. We sent one of our operatives to Saturn’s moon Titan as part of the Gamma team for the math competition at the Titan Deep Space Company. I had to do … a job.” Sandra’s face twisted.
“What? That madness? That’s not a sport, Jan! It’s a monstrosity!
“But you know the money you make in bets. And all that this entails: it is white, selling arms and drugs, and other things.
“I know too well. And the company, I prefer not to speak.”
“Why? The Titan Deep Space Company malfunctioned for a while, until its former chief executive Richard Tsakalidis regained control. Do you know him?”
“I´ve read something” Sandra lied. “But let’s focus. Are you asking me by chance to go to Titan? That fucking space station where that stupid math tournament is held? That “Math Combat Challenge”?
“Exactly. Our agent has disappeared. The last contact was three days ago. No one has seen him since. He had to send us data about a group of white traffickers and traffickers who organized the gambling business at the company’s space station. We’ve been behind them for two years. We wanted to gather conclusive evidence during the maths championship.”
“That’s not a math championship, Jan. That’s a massacre.
“Well, there’s math during the tournament.”
“Do not be sarcastic.
“I’m not! Listen, I know I owe you more than one favor.”
“And more than three.”
“I know. Will you help me? I’ll give you whatever you want in return.” Sandra hesitated for a moment.
“Anything?”
“Of course.”
“A weekend with the children on excursion. They and I alone.” Jan opened his eyes.
“What? That’s not a request! That’s a blessing!”
“And you take Irenka to some pretty place. You have abandoned her for your work.”
“Sandra, we’ve already talked about it.”
“Shut up. You will do it?”
“Agree. I will make the sacrifice of leaving the children with Aunt Sandra for a weekend.”
“It’s okay. I’ll be right out. Give me all the facts of the case.”
“Be careful, Sandra, please. They say that that area, the deep space beyond Jupiter, is crazy. Trade routes are taken by pirates, and security sold to the highest bidder. Every news is worse than the last.”
“Look who’s talking.”Because of you, I have almost blown my head twice.”
“But you’ve always managed to get through it.”
“The shots do. To hold you is another matter. Goodbye, Jan. And remember the covenant.”

Sandra took the first ship to Titan. On this occasion she did not stop at Mars, because the planet was in opposition to Saturn. She was glad of it. Sh didn’t want to remember the events that happened on the planet three years ago. There began a nightmare of which she would not want to remember anything. But her programming prevented her from hiding memories. It was part of her design. In this way the android obtained an experience, positive sometimes, negative others, and could not remain alone with the good, which gave more character to the artificial personality.

She felt some anxiety about that trip. All the anguish that can feel an android of infiltration and combat model QCS-60 advanced. Her quantum computer had ceased to be what it had been originally long ago, when she intervened in the unfortunate Operation Folkvangr. The accumulation of experiences, and the many events lived in the last hundred and seven years, had transformed her radically. And back to Titan, where she had been about to die three years ago, during that crisis with that damn ship, they had finished modeling her with a new personality. Harder, colder, but also more stable. In many respects, very little remained of the original android. Maybe nothing.

The transport left her on Titan, the satellite of Saturn that was an almost inexhaustible source of hydrocarbons for the solar system, and which exploited exclusively the Titan Deep Space Company. Sandra stayed in a hotel not far from the base where three years before she was first leader and then prisoner. The hotel had a shuttle to the space station where the sports competition known as the “Math Combat Challenge” was held. That barbarity was the favorite sport of the solar system. It was basically a huge stadium on a huge space station where participants had to solve various math problems of all kinds. Gigantic virtual panels showed various mathematical exercises, and participants had to find the right numbers moving through the stadium, or shoot the solution if it was in a group of possible answers.

The peculiarity of this sport was, however, very peculiar: it was based on the fact that these exercises had to be solved in the midst of countless traps that were happening in the stadium, in addition to an endless chain of attacks of all kinds of elements. Only occasional help was available for a bird-shaped dron. Beyond that, the motto of the competition was: to count and to survive. The winners made a fortune. Losers lost everything, including, of course, life. They could retire before they perished. But few did.

Titan Deep Space Company sponsored the game, with which it made even more money than its industry, and also allowed it to launder some of the profits made in ways not too neat. The president of the company, Richard Tsakalidis, had disappeared three years ago, during the crisis that Sandra suffered on Titan, only to appear by surprise a year later, seemingly without remembering anything of the happened thing, and taking back its position. The Board of Directors immediately readmitted him, for many and varied reasons that it was better not to remember.

Sandra settled into her room, after rejecting a couple of proposals she had had from a couple of men who had invited her into her room without even inviting her to a previous drink, something too common in her daily life. It was put in underwear with slippers, and activated the holographic emitter of sports, where they were emitted images of the competition. It was at that moment that the image of the projector was transformed. Then came a figure that was clear and bitterly recognized.

“Richard!” How?…
-Hello Sandra. Glad to see you in good condition. As beautiful as always. Those blue eyes are awesome. And that set you up very well.
“Where were you?” And where is Scott? Is he still kidnapped?
“You’ve always asked too many questions.” Let’s say Scott is now a valuable and effective partner. And let’s say that I continue with my firm and clear objectives, but that you already know. What I want to know is what you’re doing here.
“That’s none of your business, Richard. Or Zeus, as you like to be called.
-I did not like it, but in the end it’s looking good, I even added the image of Zeus to the company’s new logo. You must know that everything that happens on Titan is my business. I saw that you bought an entry for the Math Combat Challenge. Do you want me to get you a front row seat? Or are you going to participate as a math fighter?
“Go to hell, Richard.”
“Oh yeah. Hell, people send me there with some frequency. In any case, I’ll be watching you, Sandra. After what happened between us, I have a deep wound in my heart. You hurt me. I, I gave it all for you. I offered you an empire. And you paid for it by betraying me.
“You’ll have a good wound in the heart when I tear it to pieces, you pig.”
“I’m sorry, Sandra. You take this too personally, especially considering that you are nothing but a pile of scrap metal. All this is business. Simple business. And, in these businesses, you’re either with me, or you’re against me. And you are in the second group. It boils down to that. In any case, I’ll finish by finding out what brought you here. I assure.
“How did you find me so fast?”

There was no answer. The image was cut. At that moment the door sounded. Not with the bell, but with the classic knuckle touch. Sandra sighed wondering who it would be. She opened the door. On the other side of the door appeared a man of about forty years and a cloudy look. He stood erect and silent. Sandra asked:
“Who are you?”
“Jan sent you here, to look for an operative from her investigating agency that has disappeared, didn’t´he?” Sandra felt the world fall on her. First Richard discovered it when he arrived. Now that man knew perfectly well why he was there. She answered:
“How do you know that?”
“Very easy, Sandra. It turns out that I am that operative …