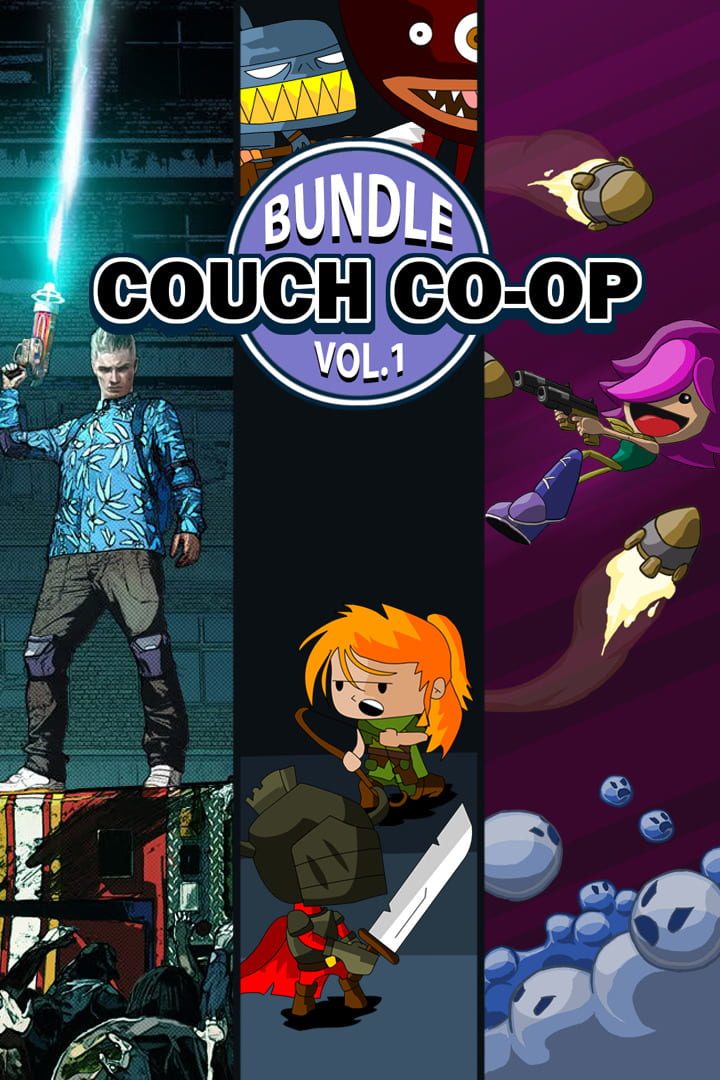 It’s better with a buddy! This bundle contains #KILLALLZOMBIES, Vertical Drop Heroes and Bleed, all of which feature local/couch co-op (as well as single-player modes).

#KILLALLZOMBIES
In the distant future, #KILLALLZOMBIES thrusts civilians into a sport of survival, where a ravenous zombie population is unleashed in the name of sports entertainment. With the potential of a collective horde of over 1,000 zombies, spectators vote upon how many and what kind of zombies or obstacles they want to uncage to make survival easier or harder for you to accomplish.

Features:
Hordes of zombies to fight on interactive changing arena
Three modes to play: Survival, Coop and Defend the Vault
Live stream interactions enabling spectators to affect gameplay while watching the broadcast
Multiple weapons and ammo types
XP and levelling up system
Powerful perks
Vertical Drop Heroes
Armed with a variety of skills and traits, you must use your cunning and reflexes to survive the dangers of each stage, until you face the final boss and uncover the truth behind the game!

Features:
Randomly generated stages, enemies and bosses, resulting in a very replayable game
Artwork, coding and animation done by one person, Nerdook, in his unique style
Split screen, local co-op
Destructible terrain and multiple uses for each skill gives you plenty of options to approach the different situations generated
Tons of skills, abilities, traits and powers that you can unlock in the game, creating a different hero each time
Unique combat system where proper planning is more important than quick reflexes
Persistent upgrades allow you to carry forward progress between games, with a choice between increasingly expensive persistent upgrades or generally cheaper temporary upgrades
Every enemy and boss has been designed to provide challenge and variety
Bleed
Wryn is a girl with a big arsenal and big dreams – she wants to be the ultimate videogame hero! Help her take down the Greatest Heroes of All Time in an action-packed bid to claim the title for herself and show the world what a true hero looks like!

There's no filler – just you and your skills against seven levels of enemies, obstacles, breakneck set-pieces and inventive bosses!

Features:
Unique control scheme enabling crazy fast action
7 levels packed with multiple set-pieces and bosses
4 difficulty levels that remix enemy placement and boss patterns
2-player local co-op for all modes (requires at least one gamepad)
3 unlockable characters with their own gameplay twists
Survive the entire game on one life in Arcade Mode
Select and battle up to three bosses at once in Challenge Mode
Achievements added for Xbox One versions
Localized in the following languages: English, Spanish, French, Italian, German and Brazilian