Exclusive Big Ben Collector's Box. A 30cm-high Jacob's Big Ben Machinery Figurine. Double-sided London Map with street advertising on the back. A high quality art book including concept art that inspired the game. The official game soundtrack. An exclusive FuturPakTM. An exclusive numbered Lithography chosen by the fans who pre-order (34x25,5cm). An exclusive premium hip flask. Digital Content: Season Pass included. 2 additional single player missions for an extra hour of gameplay: The Darwin and Dickens Conspiracy: Embark on two pulse-quickening missions that will take you into the inner sanctums of London's most influential men. Defend Charles Darwin's discoveries from those who would kill to silence him. And help a friend of legendary writer Charles Dickens keep a secret that could get him killed. Runaway Train: As a runaway train thunders through London at top speed, you must find and fix the train's critical flaws before you run out of time - or railway tracks. 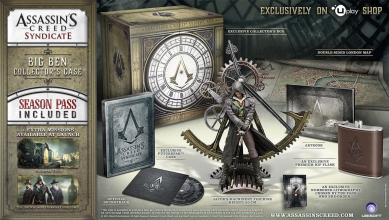